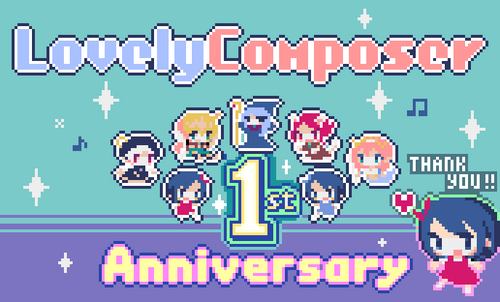 Lovely Composer is celebrating its 1st anniversary since version 1.0.0 release!

We have updated 18 times since the first official version was released, enhanced functions such as volume and pan support, support for OS such as Linux and Raspberry Pi, and improved UI.

These improvements are largely due to users cooperation. That the purchase and tip, questions and requests, release of users' songs, participation in jams, provision of sample songs by users,  and join with the beta test version. Thank you!

Today we have made the Raspberry Pi version free, for children, educational purposes, and those who do not own a compatible computer! It will works fine only on 32bit OS version of Raspberry Pi 4 or 400 at now. So please consider using it! ( It is not open source, redistribution is not permitted, except for local distribution for educational purposes)

We will also hold a 1st anniversary sale, so if you are interested, please do not miss it!